Well, sort of. I actually spent most of it in Brookline, which is a suburban city 15 minutes away from Boston by car. My friend and his family hospitably offered me their cozy guest room for the week. It was really cozy. Anyway, here's how the week went:

I got a haircut.
This is more important than you may think! Last month, a cruel and treacherous barber shaved off all of my hair without any consent (I told him to trim the sides a bit– he just went "unh huh" and then promptly buzzed it all off 😫), so getting this haircut was very vindicating for me. OK, the more I write about this the dumber it sounds, so I'm going to stop now. That was Monday!

This was a big day for me. In the morning, I was fortunate to meet with one of my favorite scientists, Dr. Michael Levin. It was a really amazing experience talking with him in person, and I'm so glad he had any time at all to talk with me about his work. Topics we covered included the limits of regeneration, use cases for artificial life like Lenia, and upcoming work of his that I'm very excited about! Overall, 10/10 experience. Would (love to) do again.
Okay, critical thinking question. What do you do if you are in Medford and want to get to Boston by train, and you have no idea where the train station is? Oh, that's right... you Uber.
I did a lot of Ubering this week. It racks up a lot in $ spent over time, but each Uber ride themselves was surprisingly inexpensive? A 30ish minute drive usually cost around $20, which seems pretty fair.
Back to Tuesday– I met up with a really great Online Friend that I've interacted with on Twitter for a while. We had a great conversation at this cute brunch place which gave us enormous plates of breakfast food for like $10 (which is pretty fair considering the volume of food but man I could only eat like half of it). Turns out we share a lot of mutuals in common! And we both have a strange fascination with Elizabeth Holmes, hm.
If you're reading this C, hi from the past!!!! It was really nice to meet you in person, and I hope we do it again sometime :))

Talked to the Director of the Glenn Center of Aging at the University of Michigan, Dr. Richard Miller. He is a wonderful man full of insights. Briefly, here are some things we went over:
Talking to him was a pleasant change of pace for me. Since there is so much hype and overdramatization of some therapies and theories by the longevity community (and even some well respected scientists), I was glad to hear his levelheaded reasoning to why X doesn't make any sense or Y is actually better than others claim.

Wednesday night was interesting– I met up with yet another Online Mutual. This was also a pretty interesting experience, since everyone there was at least half a decade older than me. Nonetheless, they treated me with full respect, despite my youth and inexperience. These people I met were mostly in the effective altruism/rationality space, which was interesting to me since I usually only know those kinds of people through my dad. Everyone was very friendly!
Things got a bit weird though when everybody started talking about psychedelics. Now don't get me wrong– I'm open to pretty much any conversation– but this was a bit jarring of an experience for me, since the hardest drug I've ever done is advil. So hearing about someone's 36 hour trip was pretty eerie lol.

I went on a donut run with my friend in Boston :)
It was drizzling pretty hard Thursday, but it was also pretty warm which was great. I would take rainy and warm over dry and cold any day.

Friday was pretty chill. I played EU4 and got crushed as the Papal States because I don't know how to manage military units to save my life.
In the evening, I went to a fusion restaurant with some college friends. It was the kind of restaurant where you have a grill the food yourself– I had never been to one before so I was taken by surprise by how fun it was! And it's a great idea for a restaurant tbh, since, as my friend put it, "they don't have to cook the food but can charge the same prices for offering the Experience of making the food yourself" !
After the restaurant, my friends and I drove to an icecream place called J.P. Licks which sells the most expensive icecream ever. $7 for a singular cone kind of expensive. It was still tasty though of course. 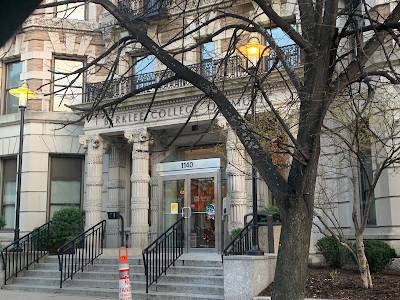 The weather was also really pristine on Friday. It was consistently high 60s - low 70s which felt so gentle. This past winter has been unforgivingly cold, so I'm extra grateful for any warm weather that comes my way. Other people seemed to have shared that sentiment too... so many people were out on the street looking content and enjoying the good weather. I didn't want it to end!

Things I liked about Boston

Overall, it was a really great experience to be in Boston. It's definitely a contender for becoming one of the places I go after college! I hope to be back soon.