A Steelman for Biden

Biden, Biden, Biden. Joe Biden. Love him or hate him, he's in the news all the time now (probably because he has the most important job in the world).

At the date of this post, Biden is not a very popular president. His approval rating is comparable to the Trump era: 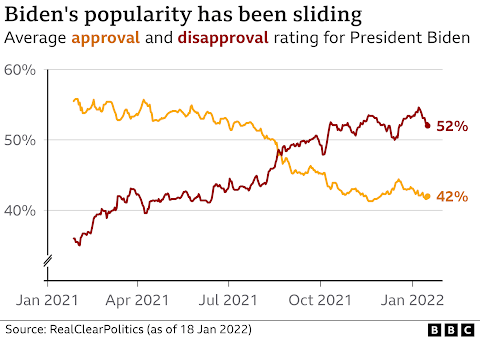 And it seems like Republicans will take back Congress soon enough.

A common Democrat line of attack I've seen in the past few months of having eyeballs is that Biden hasn't been able to pass the Build Back Better Bill.

What people don't know is that:

1) Half of it has been passed already and

2) the two most important and immediate "aspects" of it– COVID relief and infrastructure– have already been passed by Congress.

People like to make fun of Biden for causing the incredibly anomalous rate of inflation plaguing the U.S. economy right now.

But a lot of that blame I feel is misplaced– inflation is happening in part because of the supply chain crisis, consumers having more money to spend, and maybe (just a hunch), the Fed printing trillions of dollars since the start of the pandemic. In fact, inflation doesn't seem to just be a U.S. problem: inflation is plaguing diverse economies across the globe (though part of this is in reaction to U.S. inflation, fair enough).

A bit of hypocrisy I see is that people think Biden is at fault for *all* of this– he's not. When the economy was doing great under Trump, people were quick to retort that the economic state of a president is mostly the fault of the prior president. Why shouldn't that be the case here?

Biden was supposed to be the president who ended COVID, and the public has had that expectation slowly shred to pieces as the pandemic moseys on. I think this is a bit unjustified– there are so many variables to juggle in a pandemic that you can't guess which one will have the best downstream effects in a years' time. Haven't you seen yourself the "how X country beat COVID" articles one month, only to see them in the news half a year later with skyrocketing cases? (see: Taiwan, Germany, South Korea, etc)
A lot of the blame should fall on the CDC actually, who are the biggest losers of this pandemic (along with the cowardly WHO that ignores the existence of entire countries because of politics). The CDC woefully failed the U.S. early in the pandemic, and even now. If Biden were in tune with this, he would direct oversight to beat the CDC bureaucracy into better shape (Beat Back Better? lol). COVID was never just a pandemic preparedness or funding issue– it was a CDC competency issue. And now we're all suffering because of that.

Biden's military decisions have definitely come under scrutiny too for various reasons. I think this is honestly his biggest crux. He humiliated America's image of military competence in Afghanistan (grossly underestimating the Taliban's speed of takeover), and is now fumbling with the Russia-Ukraine conflict. There is not much to redeem here. I will say though that Biden's actions in Afghanistan were in a way what the American people wanted– to bring our boys back home once and for all. And he did that! I am also encouraged by Biden's nonresistance to the Space Force, which I think will grow into a very important area of defense for the stars and stripes.

Biden's image is probably what will keep him unpopular. His character is not really enjoyed by the American public. He's less controversial than Trump for sure, but he's not the most inspiring figure. He's approaching his eighties, can't really control his speech (which in all fairness is due to a lifetime stutter, not necessarily his age). He kind of resembles Magneto. And last but not least, he's a career politician who barely won his primary by a plurality and election by mere thousands of votes.

Don't hate the playa, hate the game. Biden was elected on a vague promise that he could "beat Trump"... whatever that means. Vote people in who aren't spite votes of the other guy. Candidates who have empirical data to support their policy ideas are the best– we should be looking for them and getting them to do their jobs asap!
Posted by Alex Kesin on January 26, 2022 No comments:

Email ThisBlogThis!Share to TwitterShare to FacebookShare to Pinterest
Labels: fluff

Email ThisBlogThis!Share to TwitterShare to FacebookShare to Pinterest
Labels: science

"A flatworm, a cancer cell, and a lump of intelligent frog skin walk into a bar. The bartender asks, what's the deal? The flatworm chirps: Why, we're all model organisms in the works of the scientist Dr. Michael Levin!"